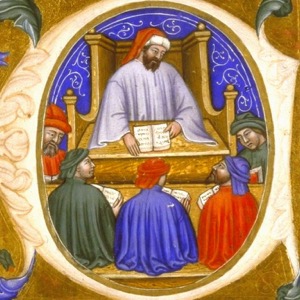 Anicius Manlius Severinus Boethius (circa 477 – 524), commonly called Boethius, was a Roman senator, consul, magister officiorum, and philosopher of the early 6th century. He was born about a year after Odoacer deposed the last Roman Emperor and declared himself King of Italy. Boethius entered public service under Ostrogothic King Theodoric the Great, who later imprisoned and executed him in 524 on charges of conspiracy to overthrow him. While jailed, Boethius composed his Consolation of Philosophy, a philosophical treatise on fortune, death, and other issues, which became one of the most popular and influential works of the Middle Ages. As the author of numerous handbooks and translator of Aristotle, he became the main intermediary between Classical antiquity and following centuries.

In living creatures, ignorance of self is nature; in man it is a vice.

But by never coming to an end it seems to make some attempt at rivialing that which it can never fully realize in its being.

All the matter of the world that surrounds us, the food that we eat, the water that we drink, the air that we breathe, the stones that our houses are built of, our own bodies — everything is permeated by all the matters that exist in the universe. There is no need to study or investigate the sun in order to discover the matter of the solar world; this matter exists in ourselves and is the result of the division of our atoms. In the same way we have in us the matter of all other worlds. Man is, in the full sense of the term, a “miniature universe”; in him are all the matters of which the universe consists; the same forces, the same laws that govern the life of the universe, operate in him; therefore in studying man we can study the whole world, just as in studying the world we can study man.

Following is a list for special self-study to help get you started up the path of spiritual freedom. After a careful review of these peace stealing conditions, take time to... END_OF_DOCUMENT_TOKEN_TO_BE_REPLACED