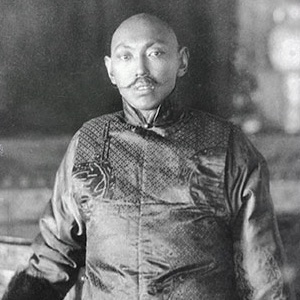 Dalai Lama is a title given by the Tibetan people for the foremost spiritual leader of the Gelug or “Yellow Hat” school of Tibetan Buddhism, the newest of the classical schools of Tibetan Buddhism. The 14th and current Dalai Lama is Tenzin Gyatso (1935). Since the time of the 5th Dalai Lama in the 17th century, his personage has always been a symbol of unification of the state of Tibet, where he has represented Buddhist values and traditions. Pictured here is Thubten Gyatso, the 13th Dalai Lama, circa 1910.

Quotes by the Dalai Lama…

Be kind whenever possible. It is always possible.

Our problems, both those we experience externally such as wars, crime, and violence, and those we experience internally as emotional and psychological suffering will not be solved until we address this underlying neglect of our inner dimension. That is why the great movements of the last hundred years and more — democracy, liberalism, socialism, and Communism — have all failed to deliver the universal benefits they were supposed to provide, despite many wonderful ideas. A revolution is called for, certainly, but not a political, an economic, or a technical revolution. We have had enough experience of these during the past century to know that a purely external approach will not suffice. What I propose is a spiritual revolution.

Beauty doth varnish age, as if new-born,
And gives the crutch the cradle’s infancy:
O, ’tis the sun that maketh all things shine.

Following is a list for special self-study to help get you started up the path of spiritual freedom. After a careful review of these peace stealing conditions, take time to... END_OF_DOCUMENT_TOKEN_TO_BE_REPLACED