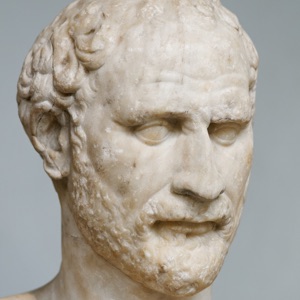 Demosthenes (384 – 322 B.C.E.) was an Athenian statesman and orator. As he was not a naturally confident speaker, he began his career by writing speeches for litigants, occasionally speaking on their behalf. He later became a political orator, and is best known for his orations against King Philip II of Macedon in opposition to his expansion into Athens. Demosthenes is considered the most famous orator of ancient Greece. In addition to his popularity among students of rhetoric, his speeches provide a historical picture of the social life of Athens in his time.

Nothing is so easy as to deceive one’s self, for what we wish to believe, we readily believe, but such expectations are often inconsistent with the real state of things.

A happy life is joy in the truth.

The other day I had an experience I’ve had countless times during my life, and I think it’s likely that you have had it too. I was going about my... END_OF_DOCUMENT_TOKEN_TO_BE_REPLACED