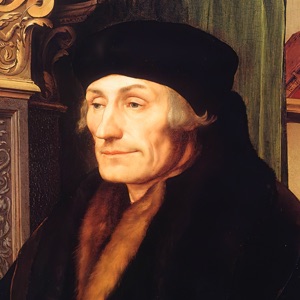 Desiderius Erasmus (1469 – 1536) was a Dutch philosopher and Christian scholar. He first attended school in Deventer, run by the Brethren of the Common Life; later joining the Augustinians at St. Gregory’s at Steyn monastery. He was ordained as a priest there in 1492, shortly before leaving to travel and study throughout Europe. He was a prolific writer, best known for his contribution to Humanism, a philosophical movement of Renaissance thinkers who believed that the best educational resources were classical literature and the original writings of the Christian church fathers. His translation of the New Testament into Greek provided a basis for many later translations into other languages.

Now what else is the whole life of mortals, but a sort of comedy in which the various actors, disguised by various costumes and masks, walk on and play each ones part until the manager walks them off the stage?

Finally, the mind of man is so constructed that it is taken far more with disguises than with realities.

But now you are awake; it is but a dream you had! For horror’s prey in darkness of the night is but our reason’s sport in morning light.

With the coming of the New Year, people everywhere are thinking about shedding the past, breaking painful old patterns, and making a fresh start. If you’ve been wishing to make... END_OF_DOCUMENT_TOKEN_TO_BE_REPLACED