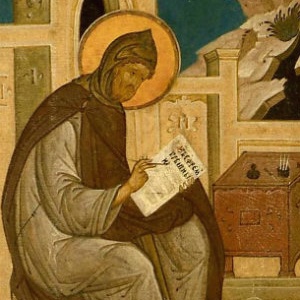 Ephrem the Syrian (circa 306 – 373), also known as Saint Ephraim, was a Syriac Christian deacon, hermit, and a prolific Syriac-language hymnographer and theologian. He wrote a wide variety of hymns, poems, and sermons in verse, as well as prose exegesis. The most important of his works are his lyric, teaching hymns, full of rich, poetic imagery drawn from biblical sources, folk tradition, and other religions and philosophies. Saint Ephraim is popularly credited as the founder of the School of Nisibis, which, in later centuries was the center of learning of the Syriac Orthodox Church.

Quotes by Ephrem the Syrian…

How many times have I promised, yet every time I failed to keep my word. But disregard this according to Thy Grace.

Over the last several months we’ve witnessed a chain of shocking events involving both war and personal tragedy. Why do people fight? Why do people hate their own lives? In... END_OF_DOCUMENT_TOKEN_TO_BE_REPLACED