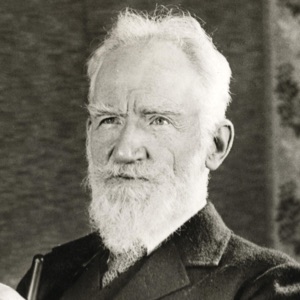 George Bernard Shaw (1856 – 1950) was an Irish playwright, critic, and activist. He was Born in Dublin, Ireland, but moved to London in 1876. His influence on Western theatre and culture extended from the 1880s to his death and beyond. He wrote more than sixty plays, including major works such as Man and Superman (1902), Pygmalion (1912) and Saint Joan (1923). In addition to plays, Shaw wrote novels, short stories and was a noted literary critic. With a range incorporating both contemporary satire and historical allegory, Shaw became the leading dramatist of his generation, and in 1925 was awarded the Nobel Prize in Literature.

This is the true joy of life: being used up for a purpose recognized by yourself as a might one. I am of the opinion that my life belongs to others, and as long as I live, it is my privilege to do for them whatever I can. I want to be thoroughly used up when I die, for the harder I work the more I live. Life is no brief candle for me. It is a sort of splendid torch which I have got hold of for a moment, and I want to make it burn as brightly as possible before handing it on to future generations.

There is only one religion, though there are a hundred versions of it.

There is an endless Kingdom to be inhabited.

Most of us have known many different kinds of love. There’s the love of sweethearts. The love of children and family. The love of the things we do, and of... END_OF_DOCUMENT_TOKEN_TO_BE_REPLACED