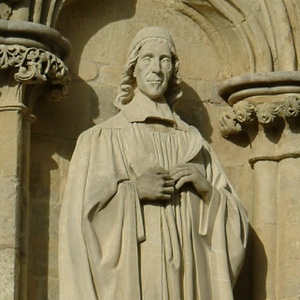 George Herbert (1593 – 1633) was a Welsh-born poet, orator, and priest of the Church of England. Following his graduation with a master’s degree from Trinity College Cambridge in 1616, he was elected a major fellow of the college and appointed Reader in Rhetoric. He was later elected to the post of the University’s Public Orator, a position he held until 1627. In his mid-thirties he took holy orders in the Church of England, spending the rest of his life as the rector of St. Andrew’s Church in Salisbury. His poetry is associated with the writings of the metaphysical poets, and he is recognized as “one of the foremost British devotional lyricists.”

Dare to be true. Nothing can need a lie.

Thou that has given so much to me, give one thing more: a grateful heart. Not thankful when it please me, as if thy blessings had spare days. But such a heart whose pulse may be thy praise.

Who seeks, and will not take when once ’tis offered, shall never find it more.

Needless to say, hardly a day goes by that we don’t find ourselves frustrated, rushing, resentful — even over minor disruptions. And then there are the major losses and trials... END_OF_DOCUMENT_TOKEN_TO_BE_REPLACED