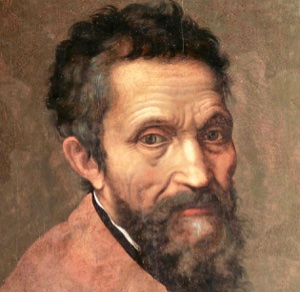 Michelangelo (1475 – 1564), whose full name was Michelangelo di Lodovico Buonarroti Simoni, was an Italian sculptor, painter, architect and poet. Showing no interest in the study of grammar, Michelangelo was apprenticed to an Italian Renaissance painter at the age of thirteen. He later attended the Humanist Academy, founded by Lorenzo de’ Medici, where his work and outlook were influenced by many of the most prominent philosophers and writers of the day. Michelangelo exerted an unparalleled influence on the development of Western art. A number of his works of painting, sculpture and architecture rank among the most famous in existence. He sculpted two of his best-known works, the Pietà and David, before the age of thirty.

My unassisted heart is barren clay,
That of its native self can nothing feed.
Of Good and pious works Thou art the seed,
That quickens only where Thou sayest it may.
Unless Thou show to us Thine own true way,
No man can find it.
Father! Thou must lead.

The greater danger for most of us is not that our aim is too high and we miss it, but that it is too low and we reach it.

I beg you to have patience with everything unresolved in your heart and to try to love the questions themselves as if they were locked rooms or books written in a very foreign language. Don’t search for the answers, which could not be given to you now, because you would not be able to live them. And the point is to live everything. Live the questions now. Perhaps then, someday far in the future, you will gradually, without even noticing it, live your way into the answer.

It’s spring! This is a time for new beginnings, new hope, and new appreciation for the endless possibilities we are given each moment to start over. The power of spring... END_OF_DOCUMENT_TOKEN_TO_BE_REPLACED