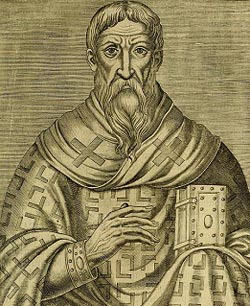 Pseudo-Dionysius the Areopagite (circa 500 A.D.) was a Christian theologian and philosopher of the late 5th to early 6th century. He wrote a set of works pseudonymously identifying himself as “Dionysius,” portraying himself as Dionysius the Areopagite, the Athenian convert of Paul the Apostle. This gave his writings the status of apostolic authority until the 19th century, when it was then noted that the mystical writings showed a marked influence from the Athenian Neoplatonic school of Proclus. Attribution of authorship aside, the Dionysian works rank among the classics of western spirituality.

Quotes by Pseudo-Dionysius the Areopagite…

The divine and conceptual scriptures are compared with dew, with water, with milk, with wine, and with honey, for they have the power like water to produce life, like milk to give growth, like vine to revive, like honey both to purify and preserve.

Pseudo-Dionysius the Areopagite (circa 500 A.D.)

Good sense and good-nature are never separated, though the ignorant world has thought otherwise. Good nature, by which I mean beneficence and candor, is the product of right reason.

We all know that a little light goes a long way to make everything brighter in life… for you, me, and everyone else. That’s exactly how one of our OneJourney... END_OF_DOCUMENT_TOKEN_TO_BE_REPLACED