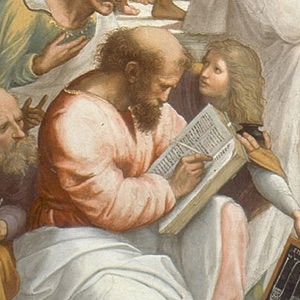 Pythagoras (570 – 495 B.C.E.) was an ancient Greek philosopher and mathematician. No authentic writings of Pythagoras have survived, and almost nothing is known for certain about his life, which is clouded by legend. Modern scholars disagree regarding Pythagoras’s education and influences, but they do agree that, around 530 B.C.E. he travelled to Croton, where he founded a school in which initiates were sworn to secrecy and lived a communal, ascetic lifestyle. Many mathematical and scientific discoveries were attributed to Pythagoras, including his famous theorem, as well as discoveries in the fields of music, astronomy, and medicine. His political and religious teachings were well known and influenced the philosophies of Plato, Aristotle, and thus Western philosophy.

Men shall you find whose sorrow they themselves have created.
Wretches who see not the Good that is too near, nothing they hear;
That is the fate that blinds humanity;
In circles, hither and yon they run in endless sorrows;
For they are followed by a grim companion,
Disunion within themselves.

Choose always the way that seems right, however rough it may be. Practice will make it easy and pleasant.

You must have patience. He who can see truly in the midst of general infatuation is like a man whose watch keeps good time, when all clocks in the town in which he lives are wrong. He alone knows the right time.

I needed some inspiration for this month’s OneJourney Newsletter Article, so I decided to visit the Living Book on the OneJourney site. When I got there I looked at the... END_OF_DOCUMENT_TOKEN_TO_BE_REPLACED