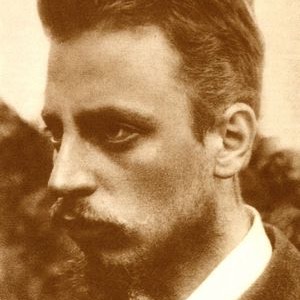 Rainer Maria Rilke (1875 – 1926) was a Bohemian-Austrian poet and novelist. He is widely recognized as one of the most lyrically intense German-language poets. Critics have described Rilke’s work as inherently “mystical.” His writings include one novel, several collections of poetry, and several volumes of correspondence. Rilke travelled extensively throughout Europe, including to Russia, Spain, Germany, France and Italy, and in his later years settled in Switzerland. These settings were the inspiration for many of his poems, particularly Russia where the people, landscape, and mysticism deeply impressed him. His best-known works include the poetry collections Duino Elegies and Sonnets to Orpheus, and The Book of Hours.

I can tell by the way the trees beat, after
so many dull days, on my worried windowpanes
that a storm is coming,
and I hear the far-off fields say things
I can’t bear without a friend,
I can’t love without a sister.

The storm, the shifter of shapes, drives on
across the woods and across time,
and the world looks as if it had no age:
the landscape like a line in the psalm book,
is seriousness and weight and eternity.

What we choose to fight is so tiny!
What fights with us is so great!
If only we would let ourselves be dominated
as things do by some immense storm,
we would become strong too, and not need names.

When we win it’s with small things,
and the triumph itself makes us small.
What is extraordinary and eternal
does not want to be bent by us.
I mean the Angel who appeared
to the wrestlers of the Old Testament:
when the wrestlers’ sinews
grew long like metal strings,
he felt them under his fingers
like chords of deep music.

Whoever was beaten by this Angel
(who often simply declined the fight)
went away proud and strengthened
and great from that harsh hand,
that kneaded him as if to change his shape.
Winning does not tempt that man.
This is how he grows: by being defeated, decisively,
by constantly greater beings.

Perhaps all the dragons in our lives are princesses who are only waiting to see us act, just once, with beauty and courage. Perhaps everything that frightens us is, in its deepest essence, something helpless that wants our love.

I beg you to have patience with everything unresolved in your heart and to try to love the questions themselves as if they were locked rooms or books written in a very foreign language. Don’t search for the answers, which could not be given to you now, because you would not be able to live them. And the point is to live everything. Live the questions now. Perhaps then, someday far in the future, you will gradually, without even noticing it, live your way into the answer.

We may be pretty certain that persons whom all the world treats ill deserve entirely the treatment they get. The world is a looking-glass, and gives back to every man the reflection of his own face. Frown at it, and it will in turn look sourly upon you; laugh at it and with it, and it is a jolly, kind companion.

Most of us have known many different kinds of love. There’s the love of sweethearts. The love of children and family. The love of the things we do, and of... END_OF_DOCUMENT_TOKEN_TO_BE_REPLACED