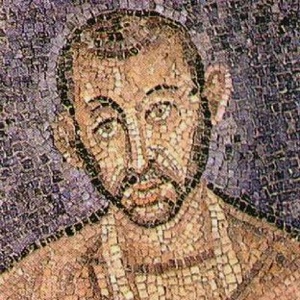 Saint Ambrose (337 – 397) was a bishop of Milan who became one of the most influential ecclesiastical figures of the 4th century. He was the Roman governor of Liguria and Emilia, headquartered in Milan, before being made bishop of Milan by popular acclamation in 374. Ambrose was one of the four original Doctors of the Church, and is the patron saint of Milan. He is notable for his influence on Saint Augustine of Hippo.

In yourself lies the sweetness of your charm, from you does it blossom, in you it sojourns, within you it rests, in your own self you must search for the jubilant quality of your conscience. For that reason Solomon says, “Drink water out of your own cistern and the streams out of your own well.”

Better is he that restrains his anger, as Solomon says, “than he that takes a city,” for anger leads astray even brave men.

A little consideration of what takes place around us every day would show us that a higher law than that of our will regulates events; that our painful labors are unnecessary and fruitless; that only in our easy, simple, spontaneous action are we strong. Place yourself in the middle of the stream of power and wisdom which animates all whom it floats, and you are without effort impelled to truth, to right, and a perfect contentment.

I needed some inspiration for this month’s OneJourney Newsletter Article, so I decided to visit the Living Book on the OneJourney site. When I got there I looked at the... END_OF_DOCUMENT_TOKEN_TO_BE_REPLACED