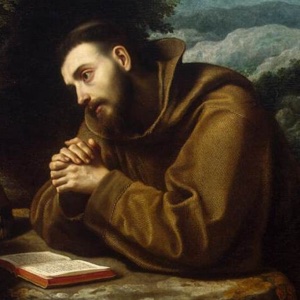 Saint Francis of Assisi (1181 – 1226) was an Italian Catholic friar, deacon and preacher. Indulged by his parents, Francis lived the high-spirited life typical of a wealthy young man. Around 1202 he joined a military expedition against Perugia, was captured and held prisoner for nearly a year. This and the development of an illness caused him to become increasingly disillusioned toward the world that surrounded him. Losing interest in his former worldly life, he devoted himself to a life of poverty. Francis is one of the most venerated religious figures in history, often remembered as the gentle saint who preached to birds, tamed wolves, and had a genuine and deep respect for all of creation.

Quotes by Saint Francis of Assisi…

Always from the child’s hand, the sword should be removed. I think every nation is an infant.

You cannot wander anywhere that will not aid you. Anything you can touch, God brought it into the classroom of your mind.

What you are looking for is what is looking.

Nothing is hidden from him who overcomes himself. Into the cause of causes shalt thou penetrate, and lifting, one after another, every veil of illusion, shalt reach at last the inmost Heart of Being. Thus becoming one with Life, thou shalt know all life, and, seeing into causes, and knowing realities, thou shalt be no more anxious about thyself, and others, and the world, but shalt see that all things that are, are engines of the Great Law.

Talk summary: In this podcast, Guy Finley talks about the difference between true feelings born of real relationship, and imaginary feelings that carry us away from the present moment.  ... END_OF_DOCUMENT_TOKEN_TO_BE_REPLACED