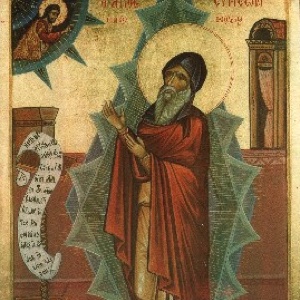 Saint Symeon the New Theologian (949 – 1022), sometimes rendered as “Simeon,” was a Byzantine Christian monk and poet who was the last of three saints canonized by the Eastern Orthodox church and given the title of “Theologian.” The title was designed to recognize someone who spoke from personal experience of a vision of the Divine. Symeon is recognized as the first Byzantine mystic to freely share his own experiences. Some of his writings are included in the Philokalia, a collection of texts by early Christian mystics. He wrote and spoke frequently about the importance of experiencing directly the grace of God.

The more a man enters the light of understanding, the more aware he is of his own ignorance. And when the light reveals itself fully and unites with him and draws him into itself, so that he finds himself alone in a sea of light, then he is emptied of all knowledge and immersed in absolute unknowing.

Those who do not love the truth take as a pretext that it is disputed, and that a multitude deny it. And so their error arises only from the fact that they do not love either truth or charity.

Human beings have always looked for solace in troubled times. When we feel discouraged, or overcome with sadness, we say we’re in a dark place, and all we want is... END_OF_DOCUMENT_TOKEN_TO_BE_REPLACED