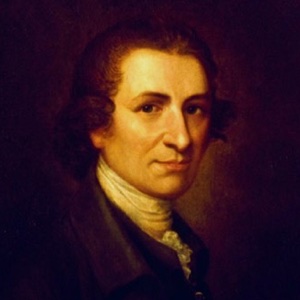 Thomas Paine (1737 – 1809) was an English-born American philosopher, political theorist, and revolutionary. He was an influential writer of essays and pamphlets. Among them were The Age of Reason, Rights of Man, and Common Sense, the all-time best-selling American title, which had a profound influence on the American Revolution, by making public a persuasive case for independence. Paine emigrated to the American colonies in 1774. In March 1775, he became editor of the Pennsylvania Magazine, bringing a strong political perspective to its content. He lived in France for most of the 1790’s, becoming deeply involved in the French Revolution. In 1803, he returned to the United States, where he lived until his death.

We have it in our power to begin the world over again.

Every morning was a cheerful invitation to make my life of equal simplicity, and I may say innocence, with Nature herself… The morning, which is the most memorable season of the day, is the awakening hour… some part of us awakes which slumbers all the rest of the day and night. Little is to be expected of that day, if it can be called a day, to which we are not awakened by our Genius, but by the mechanical nudgings of some servitor, are not awakened by our own newly acquired force and aspirations from within… to a higher life.

There is one thing most of us long for: A new beginning. Doesn’t it feel as though we carry so much baggage with us? Old pains, resentments, fears, insecurities —... END_OF_DOCUMENT_TOKEN_TO_BE_REPLACED