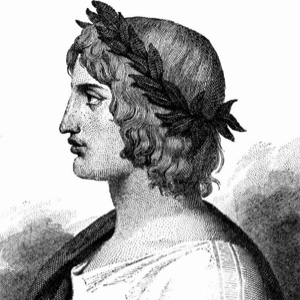 Virgil (70 – 19 B.C.E.), full name was Publius Vergilius Maro, was an ancient Roman poet of the Augustan period. He wrote three of the most famous poems in Latin literature: the Eclogues (or Bucolics), the Georgics, and the epic Aeneid. The tradition holds that Virgil was born in the village of Andes, near Mantua in Cisalpine Gaul. He attended schools in Cremona, Mediolanum, Rome and Naples. After considering briefly a career in rhetoric and law, he turned his talents to poetry. His work has had wide and deep influence on Western literature, most notably Dante’s Divine Comedy, in which Virgil appears as Dante’s guide through Hell and Purgatory.

He destroys his health by the pains he takes to preserve it.

Happy is he who has been able to learn the causes of things.

Easy is the descent into the lower world. Night and day the door of glowing dis stands open. But to recall thy steps and pass out to the upper air, this is the task, this is the work.

The Book of Psalms

When we look at the world around us, and wish it could be different, we must remember this very important truth: the world is the way it is because we... END_OF_DOCUMENT_TOKEN_TO_BE_REPLACED