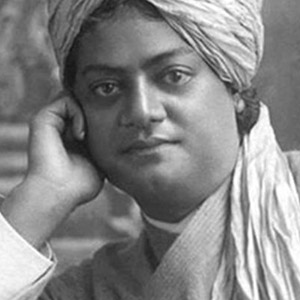 Vivekananda (1863 – 1902) was an Indian Hindu monk, a chief disciple of the 19th-century Indian mystic Ramakrishna. He was a key figure in the introduction of the Indian philosophies of Vedanta and Yoga to the Western world and is credited with raising interfaith awareness, bringing Hinduism to the status of a major world religion during the late 19th century. He was a major force in the revival of Hinduism in India. He first introduced Hinduism at the Parliament of the World’s Religions in Chicago in 1893, and over his lifetime conducted hundreds of public and private lectures and classes, disseminating tenets of Hindu philosophy in the United States, England and Europe.

It is only when everything, even love fails that with a flash, man finds out how vain, how dream-like is this world. Then he catches a glimpse of the beyond. It is only by giving up this world that the other comes, never through holding on to this one.

It is necessary to study the mind itself, mind studying mind. We know that there is the power of the mind called reflective. I am talking to you… at the same time I am standing aside, as it were, a second person, and knowing and hearing that I am talking. You work and think at the same time, another portion of your mind stands by and sees that you are talking. The powers of the mind should be concentrated and turned back upon itself, and as the darkest places reveal their secrets before the penetrating rays of the sun, so will this concentrated mind penetrate its own innermost secrets… it will all be revealed to us.

You have to make your own world, instead of succumbing to the one that presses on you. You have to turn the tables on what appears to be fate or the full weight of society. Against the greatest odds, you have to keep your wits about you and refuse to surrender to anyone or anything less than divine. You have to be faithful to the mystery taking place in your heart, rather than to any idea or system that would try, with the best of motives, to disempower you and make you theirs.

The fact that you’re reading this right now makes me think that perhaps you have certain feelings about your life that I am very familiar with, because I feel them... END_OF_DOCUMENT_TOKEN_TO_BE_REPLACED