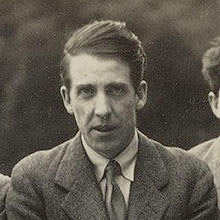 Walter James Redfern Turner (1889 – 1946), commonly known as W.J. Turner, was born and educated in Australia, but moved to England in 1907. He produced several novels and plays, as well as books of poems, but is remembered most for his musical biographies. He was music critic for the New Statesman between 1915 and 1940, and a supporter of and contributor to the Broadsides and poetry broadcasts.

You never enjoy the world aright till the Sea itself floweth in your veins, till you are clothed with the heavens, and crowned with the stars, and perceive yourself to be the sole heir of the whole world, and more than so, because men are in it who are every one sole heirs as well as you.

When all limitations are transcended, nothing remains but the One Will that is ‘I.’

I needed some inspiration for this month’s OneJourney Newsletter Article, so I decided to visit the Living Book on the OneJourney site. When I got there I looked at the... END_OF_DOCUMENT_TOKEN_TO_BE_REPLACED

To affect a quality, and to plume yourself upon it, is just to confess that you do not have it. Whether it is courage, or learning, or intellect, or wit, or success with women, or riches, or social position, or whatever else it may be that a man boasts of, you may conclude by his boasting about it that this is precisely the direction in which he is rather weak, for if a man really possesses any faculty to the full, it will not occur to him to make a great show of affecting it; he is quite content to know that he has it.