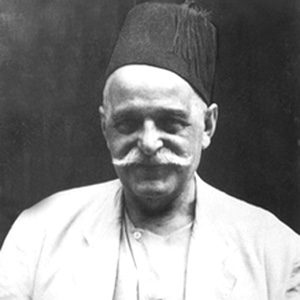 George Ivanovich Gurdjieff (1866 – 1949) was a mystic, philosopher, spiritual teacher, and composer. He was born in Alexandrapol (now Gyumri), Armenia, then part of the Russian Empire in the Transcaucasus, and spent his childhood in Kars. In early adulthood, Gurdjieff’s curiosity led him to travel to Central Asia, Egypt, Iran, India, Tibet and Rome before returning to Russia. In 1922 he established his Institute for the Harmonious Development of Man at the Chateau du Prieure at Fontainebleau, just outside Paris. Many of the methods and practices which became central to the work of Gurdjieff’s pupils were developed during this time. He introduced to the West a unique esoteric teaching of self-transformation that has been called “The Fourth Way.” Gurdjieff’s trilogy of books, titled All and Everything, contains the volumes Beelzebub’s Tales to His Grandson, Meetings with Remarkable Men, and Life Is Real Only Then, When “I Am”.

Quotes by G. I. Gurdjieff…

Real ‘I’ is the Messiah, for whom the creature is waiting.

Philosophy is a modest profession; it is all reality and plain dealing. I dislike solemnity and pretence, with nothing but pride behind it.

Most of us want the world to be a better, brighter place than it is; some of us want to do whatever we can to make it so, but it... END_OF_DOCUMENT_TOKEN_TO_BE_REPLACED

Ambition becomes displeasing once it is satisfied; there is a reaction. Our spirit endlessly aims towards some object, then falls back on itself, having nothing else on which to rest, and having reached the summit, it longs to descend.

"The sage attends to the inner, and not to the out

"There is a pretty Indian fable to the effect that

"When you sincerely enter into prayer, you will co