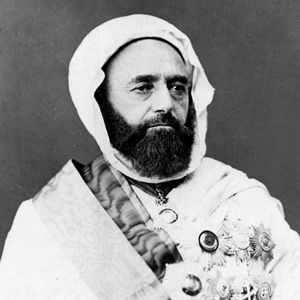 Abd-el-Kader (1808 – 1883), also known as the Emir Abdelkader or Abdelkader El Djezairi, was an Algerian religious and military leader who led a struggle against the French colonial invasion in the mid-19th century. An Islamic scholar and Sufi who unexpectedly found himself leading a military campaign, he built up a collection of Algerian tribesmen that for many years successfully held out against one of the most advanced armies in Europe. His consistent regard for what would now be called human rights drew widespread admiration. Within Algeria, his ability to combine religious and political authority has led to his being acclaimed as the “Saint among the Princes, the Prince among the Saints.”

Take a thorn-bush and sprinkle it for a whole year with water — it will yield nothing but thorns. Take a date-tree, leave it without culture, and it will always produce dates.

Freedom is not a constant attribute which we either “have” or “have not.” In fact, there is no such thing as “freedom” except as a word and an abstract concept. There is only one reality: the act of freeing ourselves in the process of making choices. In this process the degree of our capacity to make choices varies with each act, with our practice of life.

It’s spring! This is a time for new beginnings, new hope, and new appreciation for the endless possibilities we are given each moment to start over. The power of spring... END_OF_DOCUMENT_TOKEN_TO_BE_REPLACED