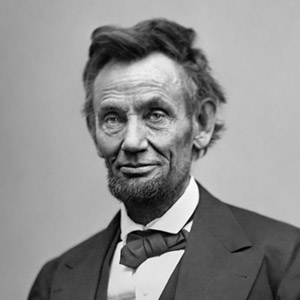 Abraham Lincoln (1809 – 1865) was an American statesman and lawyer who served as the 16th president of the United States from 1861 until his assassination in April 1865. Supposedly born into a poor family, he became an avid reader and was mostly self-educated. While he worked as a postmaster and a country surveyor, he began teaching himself law, and in 1836 he was admitted to the Illinois bar, thus beginning his career as a lawyer. Lincoln was president during the American Civil War.

Do I not destroy my enemies when I make them my friends?

I have been driven many times to my knees by the overwhelming conviction that I had nowhere else to go. My own wisdom, and that of all about me, seemed insufficient for the day.

Silence is a source of Great Strength.

We love the idea of the Divine. A benevolent, wise, loving, and timeless Being that oversees and balances all… from a single blade of grass to the greatest of suns.... END_OF_DOCUMENT_TOKEN_TO_BE_REPLACED