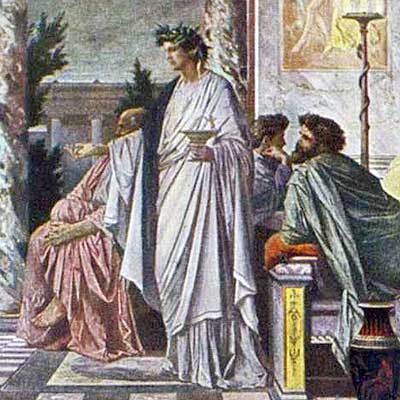 Agathon (circa 448 – 400 B.C.E.) was an Athenian tragic poet whose works have been lost. He is best known for his appearance in Plato’s Symposium, which describes the banquet given to celebrate his obtaining a prize for his first tragedy at the Lenaia in 416. He later moved to the court of Archelaus, king of Macedon, who was recruiting playwrights. Agathon introduced certain innovations into the Greek theater. Aristotle tells us in the Poetics that the characters and plot of his Anthos were original and not, following Athenian dramatic orthodoxy, borrowed from mythological or historical subjects. Agathon was also the first playwright to write choral parts which were apparently independent from the main plot of his plays.

The improvement of the mind improves the heart and corrects the understanding.

The virtue which requires to be ever guarded is scarcely worth the sentinel.

One of the most exciting aspects of the OneJourney Living Book of quotations is that through your explorations of it you can prove to yourself that wisdom is indeed timeless.... END_OF_DOCUMENT_TOKEN_TO_BE_REPLACED