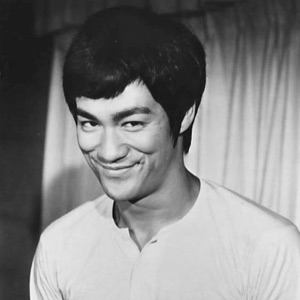 Bruce Lee (1940 – 1973) was an actor, director, martial artist, martial arts instructor, and philosopher. He was the founder of Jeet Kune Do (The Way of The Intercepting Fist), a hybrid martial arts philosophy that draws from different combat disciplines. He was born in the Chinatown area of San Francisco, California, and raised in Kowloon, Hong Kong, moving back to the United States at the age of 18. Here he attended the University of Washington in Seattle and began teaching martial arts. He is best known for elevating the traditional Hong Kong martial arts film to a new level of popularity and acclaim, sparking a surge of interest in Chinese martial arts in the West in the 1970’s. He left extensive writings in the form of journals, and many books about his life and philosophies have been published posthumously.

The Void is that which stands right in the middle of “this” and “that.” The void is all inclusive, having no opposite. There is nothing which it excludes or opposes. It is a living void, because all forms come out of it and whoever realizes the void is filled with life and power and the love of all things.

Man need not perform any acts or exploits, but has only to make an intense effort at consciousness.

Throughout spiritual teachings we find the understanding that we human beings have the ability to “create” the world we live in — for good or bad — by the way... END_OF_DOCUMENT_TOKEN_TO_BE_REPLACED