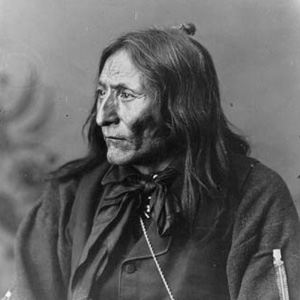 Chief Crowfoot (1830 – 1890), also known as Isapo-Muxika, was a chief of the Siksika First Nation. His parents, Istowun-eh’pata (Packs a Knife) and Axkahp-say-pi (Attacked Towards Home), were Kainai. Crowfoot was a warrior who fought in as many as 19 battles and sustained many injuries. Despite this, he tried to obtain peace instead of tribal warfare. Crowfoot is well known for his involvement in Treaty Number 7 and did much negotiating for his people. Across Canada there are a variety of different museums and historical sites like Head Smashed In Buffalo Jump, Blackfoot Crossing Historical Park which commemorate both the Blackfoot nation and specifically Chief Crowfoot.

What is life? It is the flash of a firefly in the night. It is the breath of a buffalo in the winter time. It is the little shadow which runs across the grass and loses itself in the sunset.

The world means something to the capable.

Throughout spiritual teachings we find the understanding that we human beings have the ability to “create” the world we live in — for good or bad — by the way... END_OF_DOCUMENT_TOKEN_TO_BE_REPLACED