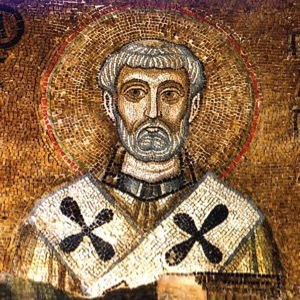 Clement of Rome (35 – 99 A.D.), also known as Pope Clement I, is considered to be the first Apostolic Father of the Christian Church, one of the three chief ones together with Polycarp and Ignatius of Antioch. Few details are known about Clement’s life. Clement was said to have been consecrated by Saint Peter, and he is known to have been a leading member of the church in Rome in the late 1st century. Clement is recognized as a saint in many Christian churches and is considered a patron saint of mariners.

Quotes by Clement of Rome…

Charity bears all things, is long suffering in all things. There is nothing mean to charity, nothing arrogant. Charity knows no schism, does not rebel, does all things in concord. In charity all the lect of God have been made perfect.

The first step to self-knowledge is self-distrust. Nor can we attain to any kind of knowledge, except by a like process.

We meet life, with all of its complex relationships, through what we know. Each daily event, with its dozens of unsuspected twists and turns, challenges us to come up with... END_OF_DOCUMENT_TOKEN_TO_BE_REPLACED