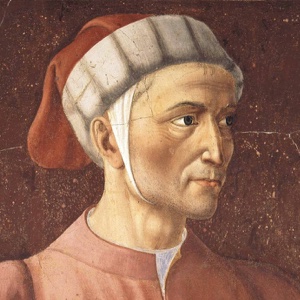 Dante (circa 1265 – 1321), born as Durante di Alighiero degli Alighieri, and commonly known by his pen name Dante Alighieri, was an Italian poet during the Late Middle Ages. His Divine Comedy, originally called Comedia, and later christened Divina by Giovanni Boccaccio, is widely considered the most important poem of the Middle Ages and the greatest literary work in the Italian language. In the late Middle Ages, most poetry was written in Latin, making it accessible only to the most educated readers. But Dante would write in the Tuscan dialect for works such as The New Life and the Divine Comedy. This highly unorthodox choice set a precedent that important later Italian writers such as Petrarch and Boccaccio would follow. Dante was instrumental in establishing the literature of Italy, and his depictions of Hell, Purgatory and Heaven provided inspiration for the larger body of Western art. He is cited as an influence on John Milton, Geoffrey Chaucer and Alfred Tennyson, among many others.

The love of God, unutterable and perfect, flows into a pure soul the way light rushes into a transparent object.

How much confusion of thought comes from our interest in self, and from our vanity when thinking “I am so great” or “I have done this wonderful deed.” The thought of your ego stands between your rational nature and truth, banish it, and then you will see things as they are. He who thinks correctly will rid himself of ignorance and acquire wisdom. The ideas of “I am” and “I shall be” or “I shall not be” do not occur to a clear thinker.

What is your number one need in life? Of course your physical body has needs that must be met if you are to survive. And you need social interaction and... END_OF_DOCUMENT_TOKEN_TO_BE_REPLACED