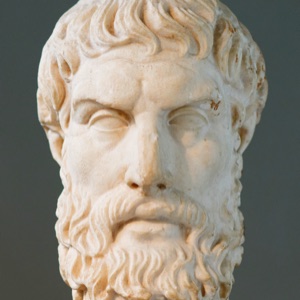 Epicurus (341 – 270 B.C.E.) was a Greek philosopher during the Hellenistic period. He grew up in the Athenian colony of Samos. He is believed to have begun his study of philosophy at the age of fourteen. At the age of eighteen he attended military training in Athens. He then spent several years travelling and studying, meeting many of the students that would attend his future schools. Around 306 B.C.E. he returned to Athens and founded the Garden, a school where his teachings were put into practice. Although he was thought to be a prolific writer, there is very little record of his work that remains. The system based on his teachings, known as Epicureanism, survived for many years after his death.

The greater the difficulty, the more glory in surmounting it. Skillful pilots gain their reputation from storms and tempests.

A strict belief in fate is the worst of slavery, imposing upon our necks an everlasting lord and tyrant, who we stand in awe of night and day.

If you do not change direction, you may end up where you are heading.

Q&A with Guy Finley Being renewed by love, and beginning your life all over again, are one and the same interior action. It starts with becoming aware of, and then... END_OF_DOCUMENT_TOKEN_TO_BE_REPLACED