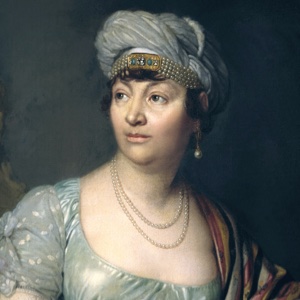 Germaine de Stael (1766 – 1817) was born in France shortly before the time of the French Revolution. Immersed in philosophy and politics from an early age, she was very much influenced by the ideas of the Age of Enlightenment, with a focus on the importance of individual liberty. She is best remembered as an early contributor to the movement of Romanticism. The opening of her Salon in the Swedish embassy, known as a focal point for those opposing the views of Napoleon, led to her imposed exile to Switzerland. Although her writings include novels, plays, and poems, her literary fame is attributed to three essays: Letters on the Work and Character of Jean-Jacques Rousseau (1788), On the Influence of Passions on the Happiness of Individuals and Nations (1796), and On Literature Considered in Its Relations to Social Institutions (1800).

Enthusiasm gives life to what is invisible.

In deepest solitude
I found the narrow way,
a secret giving such release
that I was stunned and stammering,
rising above all science.

There’s no denying that injustice and hardship hold sway in many places of this world. From a single child bullying another in the schoolyard, to leaders of countries directing the... END_OF_DOCUMENT_TOKEN_TO_BE_REPLACED