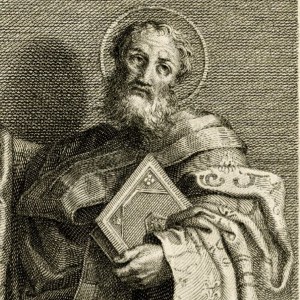 Gregory of Nazianzus (329 – 390), also known as Gregory the Theologian or Gregory Nazianzen, was a 4th-century theologian. He was born of Greek parentage outside the village of Arianzus. He studied advanced rhetoric and philosophy in Nazianzus, Caesarea, Alexandria and Athens, and was ordained Bishop of Sasima in 372. He is especially noted for his contributions to the field of pneumatology — that is, theology concerning the nature of the Holy Spirit. Gregory is a saint in both Eastern and Western Christianity.

Quotes by Gregory of Nazianzus…

That man by retiring from all externals and withdrawing into himself in the centre of his own unity becometh most like unto God.

The great Architect of the universe conceived and produced a being endowed with both natures, the visible and the invisible. God created the human being, bringing its body forth from the pre-existing matter which he animated with his own Spirit… Thus in some way a new universe was born, small and great at one and the same time. God set this “hybrid” worshipper on earth to contemplate the visible world, and to be initiated into the invisible; to reign over earth’s creatures, and to obey orders from on high. He created a being at once earthly and heavenly, insecure and immortal, visible and invisible, halfway between greatness and nothingness, flesh and spirit at the same time… an animal en route to another native land, and, most mysterious of all, made to resemble God by simple submission to the Divine will.

Do not be bewildered by the surfaces; in the depths all becomes law.

Everything we are is a reflection of greater powers than we can know, and our true strength comes in aligning ourselves with them. Pain is a universal condition. I’m talking... END_OF_DOCUMENT_TOKEN_TO_BE_REPLACED