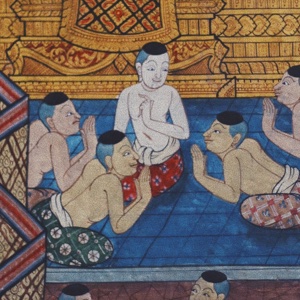 Huang Po (circa 780 – 850), also rendered as Huang-po or Huangbo, was a Chinese Zen Master who lived during the Tang Dynasty. Very little is known for certain about his life. It is believed that he was born in Fujian province and entered monastic life at an early age, studying under the Zen Master Baizhang Huaihai. Later, during a time of suppression of Buddhism, Huang Po met the scholar and government official, Pei Xiu, who would preserve his teachings in writing. Pei Xiu’s two texts compiling the teachings of Huang Po are Essentials of Mind Transmission (Ch’uan-hsin Fa-yao) and The Record of Wan-ling (Wan-ling lu). The official version of his writings, edited by senior monks, was published during the Song Dynasty as part of The Transmission of the Lamp series.

I was looking through the OneJourney Living Book for inspiration one day, and I came upon this beautiful quote by Rainer Maria Rilke, the early 20th Century Austrian Poet and... END_OF_DOCUMENT_TOKEN_TO_BE_REPLACED