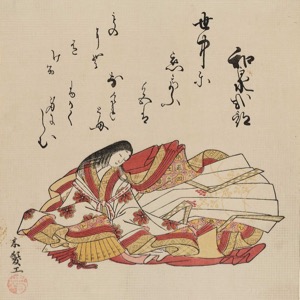 Izumi Shikibu (976 – 1030) was a writer, poet, and member of the Japanese court during the Heian Period. She is a member of the Thirty-six Medieval Poetry Immortals, a group of Japanese poets of the Asuka, Nara, and Heian periods selected as exemplars of Japanese poetic ability. Her poetry is of the waka style, in thirty-one syllables, arranged in five lines, of 5/7/5/7/7 syllables respectively. She is considered by many to have been the greatest woman poet of the Heian period. Her legacy includes 242 poems and 2 kashu.

Nothing
in the world
is usual today.
This is
the first morning.

Come quickly — as soon as
these blossoms open,
they fall.
This world exists
as a sheen of dew on flowers.

There is no need of words; believe in facts.

In the northern hemisphere we are about to experience the summer solstice. This year it occurs on June 21st. The solstice is the moment each year when the hemisphere is... END_OF_DOCUMENT_TOKEN_TO_BE_REPLACED