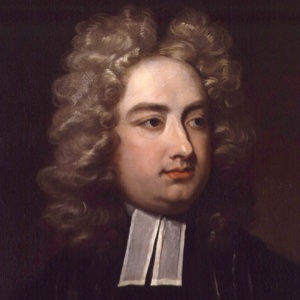 Jonathan Swift (1667 – 1745) was an Anglo-Irish satirist, essayist, poet and cleric. He attended Dublin University (Trinity College, Dublin). Swift was studying for his master’s degree when political troubles in Ireland surrounding the “Glorious Revolution” forced him to leave for England in 1688. He became increasingly active politically over the years. He is remembered for works such as A Tale of a Tub (1704), An Argument Against Abolishing Christianity (1712), Gulliver’s Travels (1726), and A Modest Proposal (1729). He originally published all of his works under pseudonyms or anonymously.

A wise man is never less alone than when he is alone.

Although men are accused for not knowing their own weakness, yet perhaps as few know their strength. It is in men as in soils, where sometimes there is a vein of gold which the owner knows not of.

It is useless to attempt to reason a man out of a thing he was never reasoned into.

What is life? It is the flash of a firefly in the night. It is the breath of a buffalo in the winter time. It is the little shadow which runs across the grass and loses itself in the sunset.

What is your number one need in life? Of course your physical body has needs that must be met if you are to survive. And you need social interaction and... END_OF_DOCUMENT_TOKEN_TO_BE_REPLACED