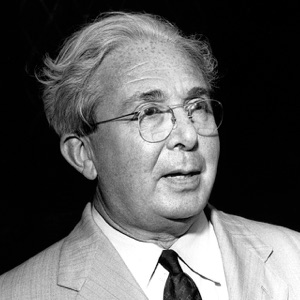 Leo Szilard (1898 – 1964) was a Hungarian-German-American physicist and inventor. His initial studies were in engineering. He left Hungary for Germany in 1919, where he began his study of physics. He conceived the nuclear chain reaction in 1933, patented the idea of a nuclear reactor with Enrico Fermi in 1934. After World War II, he changed his focus to molecular biology and helped to found the Salk Institute for Biological Studies. He was an avid promoter of the peaceful use of atomic energy, and in 1961 published a book of short stories, The Voice of the Dolphins, that dealt with the moral and ethical issues raised by his own role in the development of atomic weapons.

Devote six years to your work, but in the seventh go into solitude or among strangers so that your friends, by remembering what you were, do not prevent you from being what you have become.

While we are aware of thirsting after knowledge, we begin to seek here and there, wherever we think we can get some truth, and, failing to find it we become dissatisfied and seek in a fresh direction. All search is vain, until we begin to perceive that knowledge is within ourselves… that we must help ourselves… Then we may know that the sun is rising, that the morning is breaking for us, and, taking courage, we must persevere until the goal is reached.

In this video clip Guy tells us that the only thing we’re captive of is not understanding who and what we are and why we are on this Earth. END_OF_DOCUMENT_TOKEN_TO_BE_REPLACED