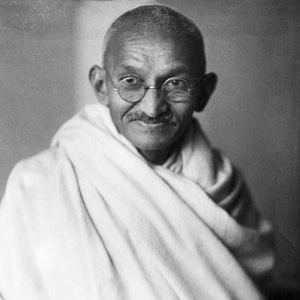 Mahatma Gandhi (1869 – 1948) was an Indian lawyer, anti-colonial nationalist, and political ethicist, who employed nonviolent resistance to lead a campaign for India’s independence from British Rule. He was born and raised in a Hindu family in coastal Gujarat, western India, and trained in law at the Inner Temple, London. At age 23 in April of 1893, Gandhi set sail for South Africa to practice law. He was quickly exposed to the racial discrimination that existed there at that time, which influenced the development of his political and ethical views. He was a prolific writer, and for decades he edited several newspapers, as well as wrote letters to individuals and newspapers almost daily. Gandhi was also the author of several books, including Hind Swaraj (Indian Home-Rule).

Be the change you wish to see in the world.

Begin to search and dig in your own field for this pearl of eternity… and when you have found it you will know that all which you have sold or given away for it is as mere a nothing as a bubble upon the water.

We all have negative reactions, probably multiple times every day. We spill coffee grounds on the counter. We’re already running late when we’re stuck in traffic. Then, here comes that... END_OF_DOCUMENT_TOKEN_TO_BE_REPLACED