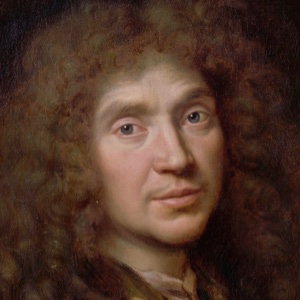 Moliere (1622 – 1673) was the stage name for Jean-Baptiste Poquelin, a French playwright and actor. He was educated at the Jesuit College de Clermont and received a law degree in 1642, but quickly changed course to pursue a career on stage. He is regarded as the creator of modern French comedy for creating a new style which allowed a “double vision” where wise and foolish, true and false, normal and abnormal, appear alongside each other. Although he faced much criticism in his time, his enduring plays have been translated into every major living language.

His eyes can read men’s inmost hearts, and all the art of hypocrites cannot decide him. His sharp discernment sees things clear and true.

There are false heroes and false devotees; and as true heroes never are the ones who make much noise about their deeds of honor, just so true devotees, whom we should follow, are not the ones who make so much vain show. What! Will you find no difference between hypocrisy and genuine devotion?

If a man empties himself of himself, who can harm him?

When it comes to growing into our best selves, we humans do a lot of thinking. We think about what’s wrong with ourselves. We talk to ourselves about who we... END_OF_DOCUMENT_TOKEN_TO_BE_REPLACED