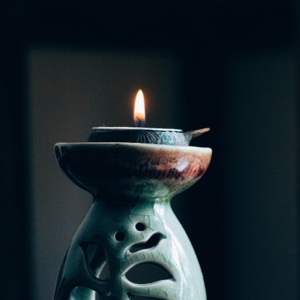 Mooji (1954), born Anthony Moo-Young, is a Jamaican spiritual teacher. In 1970 at the age of sixteen, he immigrated to England to live with his mother. He eventually worked as a street artist, and in other media such as stained glass, ceramics and sculpture, and also taught art at a college in Brixton. In late 1993, the teachings of an Indian saint drew him to India for inner life studies. Mooji lives in Portugal where he runs an ashram and offers satsang, inviting people to bring forward questions and contemplate or inquire into their real nature based on the advaita vedanta philosophy of nondualism.

There is an intuitive knowing within us that we are eternal, but this gets covered over with the noise we create while identifying with the impermanent.

I want to meet you to see if, at the end of this meeting, we leave as two.

If you come to a place of total helplessness, total powerlessness, don’t resist. You might find something that up until then you have been missing.

Many think that dying to themselves is what causes them so much pain. But it is actually the part of them that still lives that causes the problem. Death is only painful to you when you resist it. Your imagination exaggerates how bad death will be. Self-love fights with all of its strength to live. Die inwardly as well as outwardly. Let all that is not born of God within you die.

Are you afraid of some condition in your life? Here’s a life-transforming secret: that seemingly scary condition, whatever it may be, is not the problem. It is your reaction that... END_OF_DOCUMENT_TOKEN_TO_BE_REPLACED