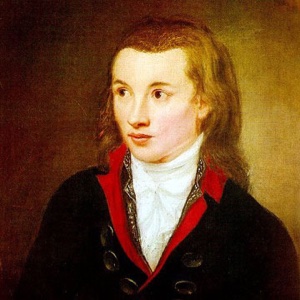 Novalis (1772 – 1801), the pseudonym of Georg Philipp Friedrich von Hardenberg, was a German poet, author, and philosopher. Following completion of his studies in jurisprudence, he began work as an actuary in 1794. Following the death of his betrothed, he began working for his father as a salt-mine inspector, just shortly before attending the Mining Academy of Freiberg. He eventually became a director of the salt mines and a magistrate of Thuringia. In the course of his short life he wrote poetry, novels, essays, and notes on a variety of subjects. His most famous work is Hymns to the Night.

Philosophy is, to tell the truth, a homesickness, an effort to return to home.

The individual soul should seek for an intimate union with the soul of the universe.

The highest purpose of intellectual cultivation is to give a man a perfect knowledge and command of his own inner self; to render his consciousness its own light.

Energy is spent chiefly on unnecessary and unpleasant emotions, on the expectation of unpleasant things, possible and impossible, on bad moods, on unnecessary haste, nervousness, irritability, imagination, day-dreaming, and so on. Energy is wasted on the wrong work of centers, on unnecessary tension of the muscles out of all proportion to the work produced, on perpetual chatter which absorbs an enormous amount of energy, on the “interest” continually taken in things happening around us or to other people and having in fact no interest whatever, on the constant waste of the force of “attention,” and so on, and so on.

We’ve all heard the expression, “You are your own worst enemy.” In fact, it’s a theme that runs through all the sacred texts and philosophies since the beginning of time.... END_OF_DOCUMENT_TOKEN_TO_BE_REPLACED