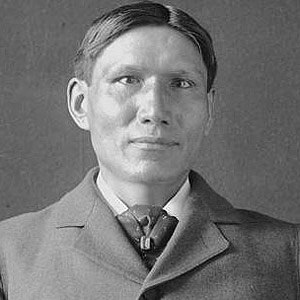 Ohiyesa (1858 – 1939), born as Hakadah and later known as Charles Eastman, was a Santee Dakota physician educated at Boston University, writer, national lecturer, and reformer. Eastman was of Santee Dakota, English and French ancestry. After working as a physician on reservations in South Dakota, he became increasingly active in issues regarding Native American rights. He worked to improve the lives of youths, and founded thirty-two Native American chapters of the Young Men’s Christian Association (YMCA). He also helped found the Boy Scouts of America. He is considered the first Native American author to write American history from the Native American point of view. His speeches and teachings emphasized peace and living in harmony with nature.

Is there not something worthy of perpetuation in our end and spirit of democracy, where Earth, our mother, was free to all, and no one saw to impoverish or enslave his neighbor?

The Indian believes profoundly in silence — the sign of a perfect equilibrium. Silence is the absolute poise or balance of body, mind and spirit. The man who preserves his self-hood is ever calm and unshaken by the storms of existence. What are the fruits of silence? They are self control, true courage or endurance, patience, dignity and reverence. Silence is the cornerstone of character.

All the world’s a stage,
And all the men and women merely players:
They have their exits and their entrances;
And one man in his time plays many parts,
His acts being seven ages. At first the infant,
Mewling and puking in the nurse’s arms.
And then the whining school-boy, with his satchel
And shining morning face, creeping like snail
Unwillingly to school. And then the lover,
Sighing like furnace, with a woeful ballad
Made to his mistress’ eyebrow. Then a soldier,
Full of strange oaths and bearded like the pard,
Jealous in honour, sudden and quick in quarrel,
Seeking the bubble reputation
Even in the cannon’s mouth. And then the justice,
In fair round belly with good capon lined,
With eyes severe and beard of formal cut,
Full of wise saws and modern instances;
And so he plays his part. The sixth age shifts
Into the lean and slipper’d pantaloon,
With spectacles on nose and pouch on side,
His youthful hose, well saved, a world too wide
For his shrunk shank; and his big manly voice,
Turning again toward childish treble, pipes
And whistles in his sounds. Last scene of all,
That ends this strange eventful history,
Is second childishness and mere oblivion,
Sans teeth, sans eyes, sans taste, sans every thing.

Even though we all know the harm it does to lash out at others, to launch an angry attack or act with cruel intent, we still tend to do these... END_OF_DOCUMENT_TOKEN_TO_BE_REPLACED