Quotes by Paul the Apostle 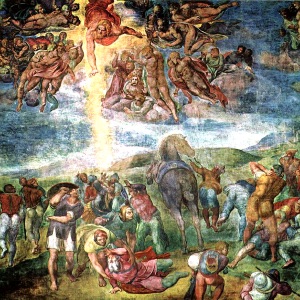 Paul the Apostle (circa 5 A.D. – 64 A.D.), commonly known as Saint Paul, was an apostle who taught the gospel of Jesus Christ to the first-century world. He was likely born between the years of 5 B.C.E. and 5 A.D. and is generally considered one of the most important figures of the the Apostolic Age. According to the account in Acts, Paul’s conversion took place on the road to Damascus, where he reported having experienced a profound change. Thirteen of the twenty-seven books in the New Testament have traditionally been attributed to Paul.

Quotations by Saint Paul the Apostle…

Faith is a conviction of the reality of the things which we do not see. Through faith we understand that the world came into being and still exists at the command of God, so that what is seen does not owe its existence to that which is visible.

Epistle to the Hebrews (11, 1-3), Attributed to Paul the Apostle

Love is the fulfilling of the law.

We are saved by hope, but hope that is seen is not hope, for who hopeth for that which he seeth?

There exists no other evil in nature than what you either do or suffer, and you are equally the author of both… Particular evil exists only in the sentiment of the suffering being; and this sentiment is not given to man by nature, but is of his own acquisition… Take away our errors and our vices… take away, in short, everything that is the work of man, and all that remains is good.

We can’t imagine there could be understanding and wisdom without thinking… and yet the true answers we seek can only be found in a realm above thought that’s connected to... END_OF_DOCUMENT_TOKEN_TO_BE_REPLACED