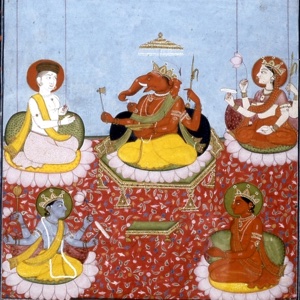 Hinduism is relatively new name for a cumulative tradition of texts and practices. It has no historical founder and is considered to be the oldest living religion, dating back over four thousand years. Sometimes referred to as the Vedic religion, it contains sacred works written in multiple languages that have been refined and expanded over time. The older of the Hindu texts are known as Shruti (that which is heard), and include the Vedas, the Brahmanas, the Aranyakas, and the Upanishads. The newer texts are known as Smriti (that which is remembered) and include the Kalpa-sutras, the Puranas, the Ramayana, and the Mahabharata, which contains the Bhagavad Gita.

Always do your duty, but without attachment to it. That is how a man reaches ultimate truth — by working without anxiety about results.

The world is imprisoned by its own activity.

In the archer there is a resemblance to the mature person. When he misses the bullseye, he turns and seeks the reason for his failure in himself.

This is the time of year when many of us think about new beginnings. Each New Year’s Day we write the date — 1/1 — and our hopes are that... END_OF_DOCUMENT_TOKEN_TO_BE_REPLACED