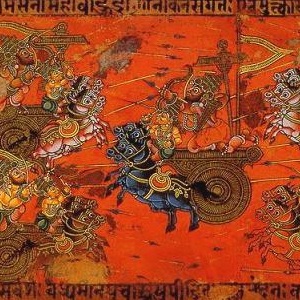 The Mahbhrata (circa 800 B.C.E.) is the longest epic poem known, and is one of the two major Sanskrit epics of ancient India. It narrates the struggle between two branches of a family in the Kurukshetra War. Along with the epic Rmyaa, it forms the Hindu Itihasa. Among the principal works and stories in the Mahbhrata are the Bhagavad Gita, the story of Damayanti, an abbreviated version of the Rmyaa, and the story of Yasringa. Traditionally, the authorship of the Mahbhrata is attributed to the sage Vysa. It is thought to have originated between the 8th and 9th centuries B.C.E., starting as an orally-transmitted tale of the charioteer bards.

This is the sum of duty: Do naught unto others which would cause you pain if done to you.

The only way to get the confidence of the world is to show the world that you do not want their confidence.

Cultures around the world set aside a day each year to express gratitude. Depending on the culture, the date varies, but it’s usually held around harvest time, when people have... END_OF_DOCUMENT_TOKEN_TO_BE_REPLACED