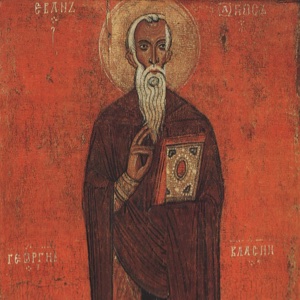 Saint John Climacus (579 – 649), also known as John of the Ladder, John Scholasticus and John Sinaites, was a 6th-7th-century Christian monk at the monastery on Mount Sinai. There is almost no information about John’s life. Of John’s literary output we know only of the Ladder of Divine Ascent, composed in the early seventh century at the request of John, Abbot of Raithu, a monastery situated on the shores of the Red Sea, and a shorter work To the Pastor, most likely a sort of appendix to the Ladder.

The mercy of God has no limits, nothing is too great for it. That is the reason why anyone who despairs of it is the author of his own death.

By closing the eyes and slumbering, and consenting to be deceived by shows, men establish and confirm their daily life of routine and habit everywhere, which still is built on purely illusory foundations. Children, who play life, discern its true law.

The OneJourney Project is based on the powerful book The Seeker, The Search, The Sacred by OneJourney founder and self-realization author Guy Finley. The purpose of this book is to... END_OF_DOCUMENT_TOKEN_TO_BE_REPLACED