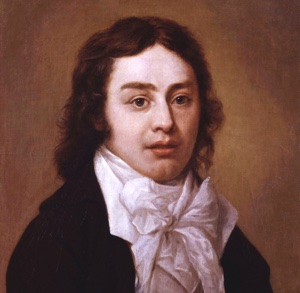 Samuel Taylor Coleridge (1772 – 1834) was an English poet, philosopher, translator, and literary critic. Following his father’s death in 1781, he began attending Christ’s Hospital grammar school and in 1791 he was admitted to Jesus College, University of Cambridge. In addition to his lifelong study of literature, he also spent two years studying philosophy in Germany. Coleridge had a profound influence on other major poets of his time. His Lyrical Ballads, written with William Wordsworth, is considered to be the beginning of the Romantic Movement of poetry in England. It contains his most famous poem, The Rime of the Ancient Mariner.

Oh, the difficulty of fixing the attention of men on the world within them!

All powerful souls have kindred with each other.

The more we know, the greater our thirst for knowledge. The water-lily, in the midst of waters, opens its leaves and expands its petals at the first pattering of showers, and rejoices in the raindrops with a quicker sympathy than the parched shrub in the sandy desert.

We receive but what we give.

All those wise and great beings who have come before us — whether from Asia, India, Europe, the Americas, and from across time — have all shared in the same... END_OF_DOCUMENT_TOKEN_TO_BE_REPLACED