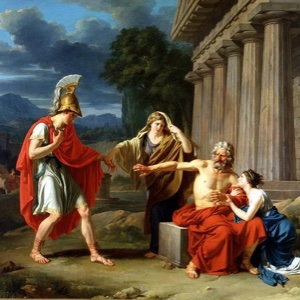 Sophocles (circa 496 – 406 B.C.E.) was one of the most distinguished tragic playwrights of ancient Greece. Aside from his long career of nearly 50 years as a playwright, Sophocles also held appointments as a treasurer and a commander of the armed forces in Athena. His most significant contribution towards the development of theater was to add a third actor, which allowed for more characters, a better flow, and an increased complexity in the plot. Only seven of the more than 120 plays he wrote have survived in their complete form. He is most remembered for Oedipus the King.

The truth is always the strongest argument.

Ever building, building to the clouds, still building higher, and never reflecting that the poor narrow basis cannot sustain the giddy tottering column.

Human beings have always looked for solace in troubled times. When we feel discouraged, or overcome with sadness, we say we’re in a dark place, and all we want is... END_OF_DOCUMENT_TOKEN_TO_BE_REPLACED