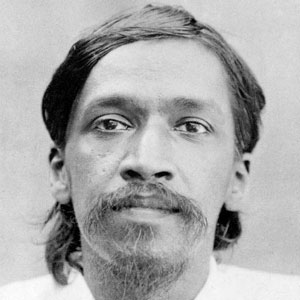 Sri Aurobindo (1872 – 1950), also known as Aurobindo Ghose, was an Indian philosopher, yogi, guru and poet. He joined the Indian movement for independence from British rule, and for a while was one of its influential leaders. He later left politics to concentrate on spiritual work, introducing his visions on human progress and spiritual evolution. Sri Aurobindo developed a method of spiritual practice he called “Integral Yoga.” The central theme of his vision was the evolution of human life into a life divine. He believed in a spiritual realisation that not only liberated man but transformed his nature, enabling the divine life to touch the earth.

Only the illimitable permanent is here. A peace stupendous, featureless, still replaces all, what once was I, in it a silent unnamed emptiness content either to fade in the unknowable or thrill with the luminous seas of the Infinite.

In this vision of things the universe will reveal itself in its unity and totality as a manifestation of a single being, nature as its power of manifestation, evolution as its process of gradual manifestation in matter.

I call that mind free which protects itself against the usurpations of society, which does not cower to human opinion, which feels itself accountable to a higher tribunal than man’s, which respects itself too much to be the slave or tool of the many or the few.

Talk summary: In this podcast, Guy Finley talks about the difference between true feelings born of real relationship, and imaginary feelings that carry us away from the present moment.  ... END_OF_DOCUMENT_TOKEN_TO_BE_REPLACED