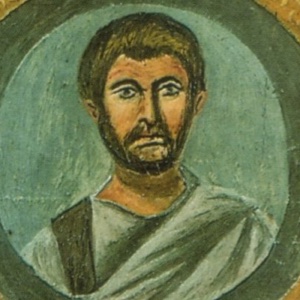 Terence (circa 195 – 159 B.C.E.) was a Roman playwright. He was brought to Rome as a slave by a Roman senator who first educated and then later freed him. His comedies were performed for the first time around 170-160 B.C.E. When he was 25 years old Terence travelled to Greece and never returned. Due to his clear and entertaining language, his works were heavily used by monasteries and convents during the Middle Ages and The Renaissance. Scribes often learned Latin through the meticulous copying of Terence’s texts, and priests and nuns often learned to speak Latin through reenactment of his plays. The preservation through the church enabled Terence’s work to influence much of later Western drama.

Come near to this fire and you will soon be more than warm enough.

There is a demand these days for men who can make wrong conduct appear right.

He need not go away from home for instruction.

We are foolish to depend on the society of our fellow-men… they will not aid us… We should seek the truth without hesitation, and, if we refuse it, we show that we value the esteem of men more than the search for truth.

In this podcast, Guy Finley explores the true meaning and purpose of meditation, and explains why it is the most natural and practical thing you can do for yourself.  ... END_OF_DOCUMENT_TOKEN_TO_BE_REPLACED