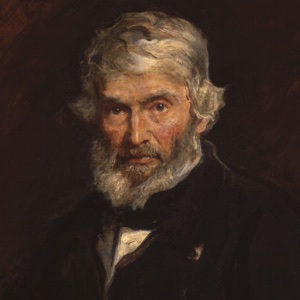 Thomas Carlyle (1795 – 1881) was a Scottish philosopher, satirical writer, essayist, translator, historian, mathematician, and teacher. Considered one of the most important social commentators of his time, he presented many lectures during his lifetime with acclaim in the Victorian era. A respected historian, his 1837 book The French Revolution: A History was the inspiration for Charles Dickens’ 1859 novel A Tale of Two Cities, and remains popular today. Carlyle’s 1836 Sartor Resartus is a notable philosophical novel.

The courage we desire and prize is not the courage to die decently, but to live manfully.

The eternal stars shine out as soon as it is dark enough.

When we are unhurried and wise, we perceive that only great and worthy things have any permanent and absolute existence, that petty fears and petty pleasures are but the shadow of reality. This is exhilarating and sublime.

We meet life, with all of its complex relationships, through what we know. Each daily event, with its dozens of unsuspected twists and turns, challenges us to come up with... END_OF_DOCUMENT_TOKEN_TO_BE_REPLACED