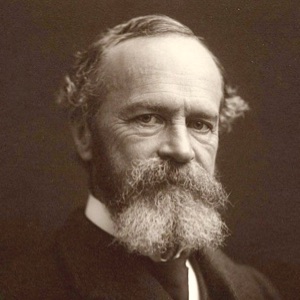 William James (1842 – 1910) was an American philosopher and psychologist, and the first educator to offer a psychology course in the United States. James was a leading thinker of the late nineteenth century, one of the most influential U.S. philosophers, and has been labelled the “Father of American psychology.” James co-established the philosophical school known as pragmatism. James trained as a physician and taught anatomy at Harvard, but never practiced medicine. He wrote widely on many topics, including epistemology, education, metaphysics, psychology, religion, and mysticism. Among his most influential books are The Principles of Psychology and The Varieties of Religious Experience.

We may be in the Universe as dogs and cats are in our libraries, seeing the books and hearing the conversations but having no inkling of the meaning of it all.

I am done with great things and big things, great institutions and big success, and I am for those tiny, invisible molecular moral forces that work from individual to individual, creeping through the crannies of the world like so many rootlets, or like the capillary oozing of water, yet which, if you give them time, will rend the hardest monuments of man’s pride.

The spiritual life justifies itself to those who live it, but what can we say to those who do not understand? This, at least, we can say: that it is a life whose experiences are proved real to their possessor, because they remain with him when brought closest into contact with the objective realities of life. Dreams cannot stand this test. We wake from them to find that they are but dreams. Wanderings of an overwrought brain do not stand this test. These highest experiences that I have had of God’s presence have been rare and brief — flashes of consciousness which have compelled me to exclaim with surprise, “God is here!”

William James (1842 – 1910), from The Varieties of Religious Experience, attributed to J. Trevor

Strange is it that our bloods,
Of colour, weight, and heat, pour’d all together,
Would quite confound distinction, yet stand off
In differences so mighty.

We all wish to be filled with wisdom, with peace, with compassion. But what are we actually filled with most of the time? Our minds spill over with reruns from... END_OF_DOCUMENT_TOKEN_TO_BE_REPLACED