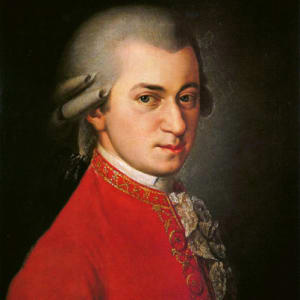 Wolfgang Amadeus Mozart (1756 – 1791) was a prolific and influential Austrian composer of the classical era. He showed prodigious ability from his early childhood. Already competent on keyboard and violin, he composed from the age of five and performed before European royalty. Despite artistic success, Mozart grew increasingly discontented with Salzburg, eventually settling in Vienna where he composed many of his best-known symphonies, concertos, and operas. He composed more than 600 works, many of which are acknowledged as pinnacles of symphonic, concertante, chamber, operatic, and choral music. He is widely recognized as one of the greatest composers in the history of Western music.

I have never written the music that was in my heart to write. Perhaps I never shall with this brain and these fingers, but I know that hereafter it will be written. When, instead of these few inlets of the senses through which we now secure impressions from all without, there shall be a flood of impressions from all sides, and instead of these few tones of our little octave there shall be an infinite score of harmonies — for I feel it, I am sure of it. This world of music, whose borders even now I have scarcely entered, is a reality, is immortal.

I created thee rich, why dost thou bring thyself down to poverty? Noble I made thee, wherewith dost thou abase thyself? Out of the essence of knowledge I gave thee being, why seekest thou enlightenment from anyone beside Me? Out of the clay of love I molded thee, how dost thou busy thyself, with another? Turn thy sight unto thyself, that thou mayest find Me standing within thee… mighty, powerful and self-subsisting.

Three decades ago, Rock and Roll Hall of Fame songwriter and performing artist, Neil Young, released an album with the spiritually prophetic title, “Rust Never Sleeps.” He could see the... END_OF_DOCUMENT_TOKEN_TO_BE_REPLACED