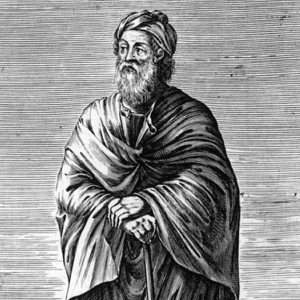 Xenophanes of Colophon (circa 570 – 475 B.C.E.) was a Greek philosopher, theologian, poet, and social and religious critic. He lived a life of travel, leaving Ionia at the age of 25 and continuing to travel throughout the Greek world for another 67 years. Some scholars say he lived in exile in Sicily for a time. Knowledge of his views comes from fragments of his poetry, surviving as quotations by later Greek writers.

Without effort, he rules all things by the power of his mind.

The pure man… has the power of bringing it (higher truth) into a certain state of vibration, which can be conveyed to others, arousing in them a similar vibration. You see that in everyday actions. I am talking to you. What am I trying to do? I am, so to say, bringing my mind to a certain state of vibration, and the more I succeed in bringing it to that state, the more you will be affected by what I say. All of you know that the day I am more enthusiastic the more you enjoy the lecture.

Just as a storm in the atmosphere of the earth is born of conflicting fronts of different temperatures colliding with one another, so too must there be conflicting forces within... END_OF_DOCUMENT_TOKEN_TO_BE_REPLACED